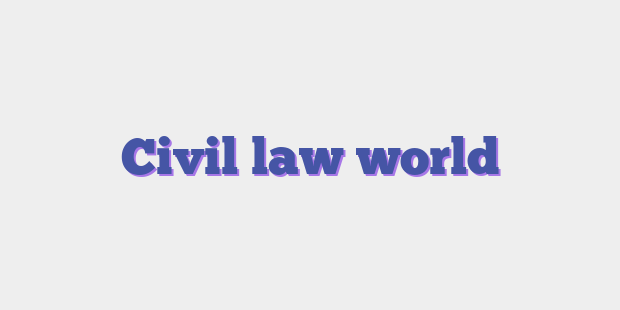 The Civilian system of law is a codified law that sets out a comprehensive system of rules that are applied and interpreted by judges. It is by and large the most commonly practiced system of law in the world, with almost 60 % of the world’s population living in a country ruled on the civilian system.

The most important difference to common law is that normally, only legislative enactments are considered to be legally binding, but not precedent cases. However, as a practical matter, courts normally follow their previous decisions. Furthermore, in some civil law systems (e.g. in Germany), the writings of legal scholars have considerable influence on the courts.

In most jurisdictions the core areas of private law are codified in the form of a civil code, but in some, like Scotland it remains uncodified. The civil law system has its origins in Roman law, which was adopted by scholars and courts from the late middle ages onwards. Most modern systems go back to the 19th century codification movement. The civil codes of many, particularly Latin countries and former French and Spanish colonies closely trail the Code de Napoléon in some fashion. However, this is not true for most Central and Eastern European, Scandinavian and East Asian countries. Notably, the German BGB was developed from Roman law with reference to German legal tradition.

The importance of the Code Napoléon should also not be overemphasized as it covers only the core areas of private law, while other codes and statutes govern fields such as corporate law, administrative law, tax law and constitutional law.